UK economy in weakest growth since 2012 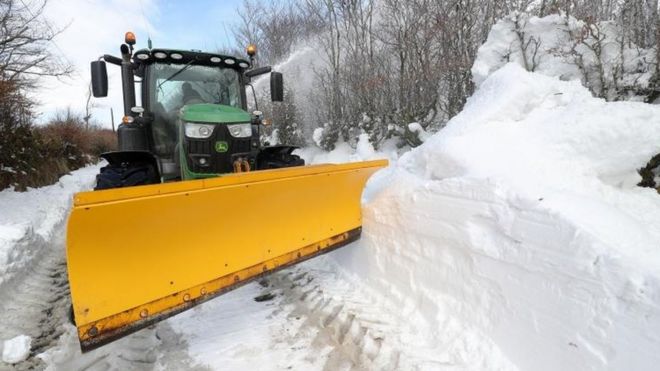 The impact of the 'Beast from the East' weather front was "relatively small", the ONS said

The UK economy grew at its slowest rate since 2012 in the first quarter of the year, the Office for National Statistics (ONS) has said.

GDP growth was 0.1%, down from 0.4% in the previous quarter, driven by a sharp fall in construction output and a sluggish manufacturing sector.

The ONS said the recent extreme weather had a "relatively small" impact.

The prime minister's spokesman said the data was "clearly disappointing" but the economic fundamentals "are strong".

He said the economy "has grown every year since 2010 and unemployment is at a 40-year low, but we are not complacent". The government would continue with a balanced approach, he added.

Sterling fell sharply as the chances of an interest rate rise in May receded. Following the news the pound was down almost one and a half cents against the dollar at $1.3775.

"While the snow had some impact on the economy, particularly in construction and some areas of retail, its overall effect was limited with the bad weather actually boosting energy supply and online sales."

The figures are a first estimate and are likely to be revised by the ONS as more data becomes available. Many economists had forecast first-quarter growth of 0.3%.

John Hawksworth, chief economist at PwC, said: "These are only preliminary figures and are based largely on estimates rather than actual data for March, when the snow was at its worst. So there could be larger than usual revisions." 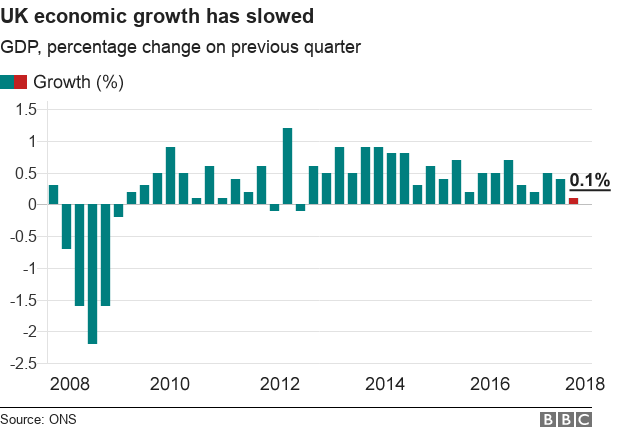 Construction was the biggest drag on GDP, falling 3.3% over the first three months of the year, while manufacturing growth slowed to 0.2%.

Last week, the governor of the Bank of England, Mark Carney, hinted that interest rates could rise more gradually than expected due to continuing uncertainty over Brexit and "mixed data" on the economy.

Ben Brettell, senior economist at Hargreaves Lansdown, said that taken with the latest GDP figures, the chances of a rate rise had now fallen dramatically.

"As recently as last week markets were pricing in a near 90% chance that the Bank of England would raise rates next month... today the market's saying there's just a 25% chance that rates will move in May."

Everybody was all set to blame the Beast from the East, the blast of snow and cold that hit the country last month, for a slowdown in growth.

But not only was the slowdown much sharper than thought, but the ONS then very helpfully explained that it was NOT due to the bad weather. Any fall in economic activity as we huddled indoors was mainly replaced by us turning up the heating and shopping online.

Now, GDP figures are often revised and there will be some bounce back. But the more worrying factor is that construction is deep in recession, manufacturing's spurt of growth is slowing, and consumer-facing service companies are not as full of the joys of spring as they were.

If that trend continues the economy will struggle to rebound, no matter what the weather.

Despite the weak figures, some economists suggested the slowdown could prove to be temporary, noting the one-off impact of this winter's weather.

Wage growth is also picking up, unemployment is at a four-decade low and inflation fell in March to the lowest rate in a year.

Chancellor Philip Hammond said the latest data "reflects some impact from the exceptional weather that we experienced last month, but our economy is strong and we have made significant progress".

"Our economy has grown every year since 2010 and is set to keep growing, unemployment is at a 40 year low, and wages are increasing as we build a stronger, fairer economy that works for everyone."

Shadow chancellor John McDonnell said: "The chancellor will want to blame this all on a bit of bad weather, but the ONS say this had a limited impact. The truth is that the last eight years of Tory economic failure has allowed our economy to be left exposed.

"It's clear to everyone except Philip Hammond that our economy is in need of increased investment and working families are struggling with the cost of living and the burden of increasing household debt."